Get in touch with Elliot Porter. 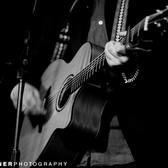 Send a message to Elliot Porter and check the availability

“Elliot Porter’s music is beautiful with lovely Lennon and Damien Rice-esque melodies that stay with you and touch the soul”.
- Lonely Oak Radio

Being from a musical family, Cambridge singer-songwriter Elliot Porter grew up listening to his father and grandfather playing music and used to watch them from the side of the stage.

With a taste for music, his life initially took a different path until he was made redundant from his job.
On that same day he had just bought his first small stage piano, but now had no job to fund it. So with a piano under his arm and modest redundancy money, Elliot set out making his first record with the hope of making music his new life.

He has not looked back since and with critical acclaim and airplay from national radio including BBC Radio 2 with ‘Keep Going’, a host of top support slots and a whole album worth of new material recorded, he is ready to let the world hear his best work.

Everything Elliot has achieved has been without any label backing or management and he continues to forge forward independently with backing from his team and loyal fan base.
Plans are in place for an album release in 2019 and a full band tour to follow.

The Way To You

Keep It To Yourself

Elliot played at my wedding ceremony and reception. He played the most beautiful versions of the songs I requested and I couldn't fault him at all! And his is coming from the fussiest bride ever who also plays the piano :) I would recommend if you want to create a relaxed and beautiful atmosphere for your event. Thanks agan Elliot.

Plays
Covers and own songs

Price is negotiable depending on location, type of gig and length of set.

The performances of Elliot Porter are well received. The average rating is 5.0 out of 5 stars, based on one review by prior bookers.

Elliot Porter has a price indication of £150 - £500 for gigs. Keep in mind that things like sound equipment, travelling distance and play time typically influence the definitive price. Don't hesitate to contact the artist!